Wazir Khan Mosque is located directly opposite the Wazir Khan Chowk (roundabout) near the Delhi Gate. It is one of the most notable attractions on The Royal Trail. Despite being one of the last prominent remnants of the Mughal Dynasty in Lahore, this mosque gets little mention when listing must-see places in the city. In recent years, however, the place has seen a surge in visitors. Social media worthy photo-ops may be one reason why.

Wazir Khan Mosque is often considered the lesser version of Badshahi Masjid. Our writer explored the structure and his findings contest this as a severe misrepresentation. The meticulously patterned tiles along its grand entrance a treat in themselves.

The din and dust of the bustling Walled City resound in Wazir Khan’s atmosphere. This makes for a fitting backdrop as one admires the outer façade of the Mosque. Even though the original entrance at the front of the mosque is no longer used, you can stand at the chowk and take in the structure. Its grandeur demands appreciation in silence. The dominating feature of this entrance are the minarets on either side. In signature Mughal glory, they boast Persian and Mughal floral patterns, Islamic geometric motifs and Arabic calligraphy. The yellow and purple mosaic exterior is noticeable from a distance but requires closer inspection. If this isn’t awe-inspiring enough, wait till you enter the Wazir Khan Mosque itself. There is so much more that it has to offer.

The most commonly used entrance is a recently constructed one, towards one of the mosque’s sides. This change, and many others have been made by the Aga Khan Trust in an effort to preserve this cultural marvel. This path is outlined by arches on either sides, with rooms between them dedicated to the Ministry of Religious Affairs and other administrative bodies. On further inquiry, I was told that these spaces were previously occupied by vendors and shop owners.

Once you pass through this space, you step barefoot onto a big courtyard. It resembles the structure of the Badshahi Mosque, despite being considerably smaller in size. However, Wazir Khan still holds its own. Colorful borders enhance the sun-baked brick floor in the courtyard. A running fountain with water for ablution rests in the center. The open space is enclosed by rooms with arched entrances on all four sides. Although these rooms are empty now, they were historically the residential quarters for the Imam (prayer leader) and his family. A shrine to the western side of the courtyard honors the Iranian sufi-saint Hazrat Miran Shah. In fact, this structure predates the mosque itself, which was built around it by Emperor Jahangir. 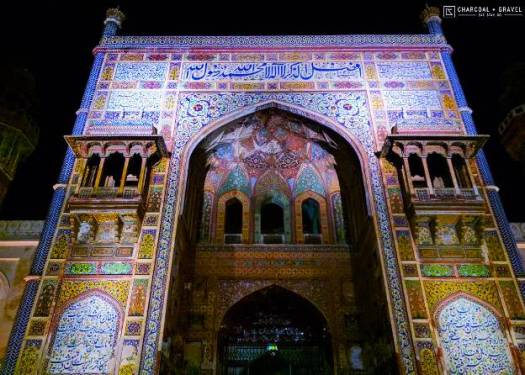 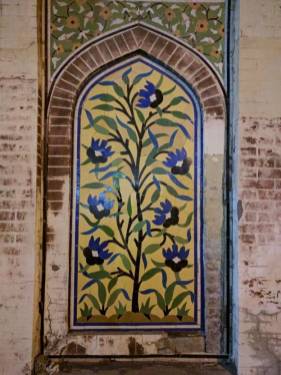 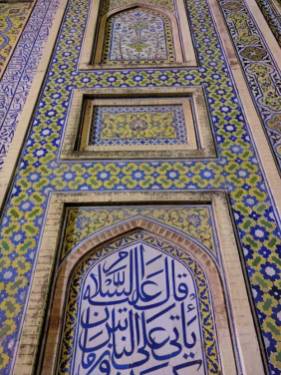 Sturdy minarets stand tall and strong at the corners of the courtyard. These octagonal giants have domes over them with detailed designs from the same Persian-styled colour palette as the mosaics on the walls. I would even risk being pooped on by pigeons hovering around them if I could sit on top of one of them and marvel at the craft of those who made them.

The prayer hall has a magnificence of its own. The angular cuts of the interior arches, the mehrab and the roof force one to wonder about the deftness with which this spectacle was created. How are such cuts even possible? Rhetorical questions like these flooded my mind as I explored the mosque and I could not believe that despite having lived in Lahore for most of my life, I had never visited this architectural masterpiece before. I am elated to have fallen victim to its spell, and wholeheartedly encourage everyone – locals and tourists – to experience it for themselves.

Tags:
A Page out of History, For the Squad, Instaworthy
Share:

A skinny, silky-haired human. He's a writer, actor, civic-educationist, music enthusiast, and occasional poet when emotions run too high. His favorite fashion choice is wearing his heart on his sleeve. And you will never find him dancing around the room because he does it only when no one's looking.

This Weekend in Karachi: Minutes Till Midnight

This Weekend in Lahore: Colony and Corridor

This Weekend in Lahore: Bhool Bhulakar

This Weekend in Karachi: Just Hang in There